Not failure, but low aim, is crime. - James Russell Lowell

I've missed you, BlogLand! It's been almost a week!! What have I been up to? Well.... not a lot. Frustratingly so. Whatever leg muscle (I still can't establish if it's my calf or my hamstring) that I made angry last weekend, that is causing this pulling sensation in the back of my knee just will not chill out. Sprints on Tuesday night, even with a really long warm up, were a decided No-Go. I've been taking frequent/long walks to stretch it out, foam rolling, stretching, hydrating, Ibuprofen, ice... the whole works. It gets a little better... but I'm still not back 100%. W.T.F.

So, because I've been so frustrated, I won't lie, my thought processes have been a bit unpleasant. Usually, I would blog them out for you all to follow along with (and know that you're not the only one who gets ugly when the going gets tough!), but my head was getting so frazzled with it that I just didn't want to blog. Blogging makes me think about my experiences, which is generally good, but I didn't think spending the last 7 days blogging endlessly about how I still wasn't able to run/train back to 100% was going to be a good mental exercise.

Basically, I have some imminent goals for myself, like by my 30th birthday (19 days), get under 200#... which will be approximately 7-8 more pounds of weight loss. And I've been really struggling with losing the weight. Thus, not being able to WOD like I would usually had me in a panic. I freaked out about probably not meeting that goal... which then had me freak out about the fact that I probably wouldn't be doing my One Pullup on my birthday like I'd hoped, and then I started questioning every goal I had - completing the Beast, doing these half marathons.... maybe I was aiming too lofty... yadda yadda yadda.

Thankfully, during one of these freak outs one morning on my way to work, while my knee stiffened and ached in the car, I had texted my GT (who is the patient sounding board for many of these kinds of freak outs...), and lost my mind a little bit, as per usual. Worrying about not making my goals, not losing weight and getting stuck in this stagnant "place I was in."
His response: "This place you're in?? You just ran and Super and a Sprint in the same weekend!"

Sometimes, BlogLand, I (like many of you, I'm sure), get so focused on the ONE TREE in front of me. The all consuming one tree (immediate goal, upcoming race, etc.), that I completely forget the forest of accomplishments and victories. I did just finish a Super and a Sprint in one weekend. That's 14+ miles of running, mud and obstacles. TWO medals. And I felt okay, minus a tight muscle. Well. Go figure. haha

So, in the meantime, the GT gave me a task. MORE WATER. My official goal was 100 oz/day. I won't lie, I Googled this amount to verify (I'm sorry. You're always right, GT. I don't know why I continue to question!), because it seemed like SO much water. But, even Google agreed. A person of my height and weight and activity level should be at 90-100 oz of water a day. 3 liters. 3 big Nalgene bottles. Ohhhhh my. And here I was thinking I was "hydrated" and drinking a lot of water.

Nonetheless, I've been doing it. I bought a bigger water bottle for work, and have told my self that I will drink two of them during the work day. Little, achievable goals.

However, I HAVE had some positive things happen in the last few days, despite the leg-stupid.

So, one of my most favorite Spartan Chicks, Peyton (who can't love the person who gave you your first tire?) had invited me to come do this small, local 5K that a friend of hers was running.
It has a really entertaining legend around the name, and seemed like it would be a low-key good time. (Weird. When did running a 5K on a Saturday morning become a low key good time?)

My leg felt okay. A little stiff getting up in the morning, but it seemed to warm up during walks or exercise, so I was determined to give this 5K a go. I couldn't be benched forever, I'd just work through it slowly, if I needed to. Peyton and I lined up at the very "official" starting line (the race official pointing his toe at a spot on the road. lol), and waited for the gun to go off. We were in the first 2 rows of people, as we wanted the most accurate time (it was being timed from gun time, not a super-accurate chip time).

In previous races, I spend some time trying to keep up with Peyton, then struggling to at least keep her in my sights... then losing her completely. Damn fast bitch, that one. (hehe) This race, however, I was able to mark my progress a bit. I was right with Peyton for the first part of the race, and at mile 1 she informed me we were running an 8:30 mile. HOLY crapola, BlogLand. I feared that I was going to burn out at that pace, but I was still feeling okay, despite the blazing sun... so... I kept pushing. Don't. Lose. Peyton, I kept telling myself.

Then, we entered the portion of the race that it billed as "gentle rolling hills." BIG. LIE. What that means is yeah, you'll have a downhill, right after you blow out your legs running up the steep side of it. Alright, slight exaggeration, but these hills were nothing to be sneezed at, and they were the WHOLE course. Up, down. Up. Down. I was suddenly very grateful I run around in Vermont. I found myself passing a lot of people, and maintaining my time, on the hills. It's all about just keeping a steady rhythm. Left-right, left-right until you're at the top... at which point you remind yourself that your lungs will not explode, they just feel like they're going to, and your legs will not fall off, you just want them to. Keep running.

I was still with Peyton! (alright, slightly behind her... but only by a few feet!) Although, I was starting to feel the heat, after the first big  hill. This was a straight on-pavement road race, and there was not a cloud in the sky. I admit, I did have to take a couple of walk breaks - just for short intervals, just to catch my breath and regroup (the heat is challenging for me). But I wasn't giving up. This might be my shot at my sub-30 minute 5K. And I was right on Peyton's tail. I was ON TRACK.

I wanted to die on the last hill. It was hot. As I ran up the incline, I could feel my knee thing pulling uncomfortably. Sweat was running into my eye. Embrace the Suck, I told myself. This is where the victory would be decided. Up the hill I went, determined face on. Cresting the hill, I heard people shouting that we were almost to the end, so I poured out whatever energy I could find in my legs, and set my sight on catching Peyton - who had gained a bit of a lead, at this point.

I roared around the corner with the clock and glancing up I saw 31 min and change. In disbelief, I looked back at it. HOW could that BE? I was cruising this whole race!! I could feel it!!!

Well, long story short, several GPS trackers confirmed that our course was over a standard 5K length. By 2-3 tenths of a mile. Since I came in only one person behind Peyton, we're using her GPS as OUR official marker - which indicated that this would've been the first 5K that I've done in LESS than 30 minutes, with average mile times of well under 10 minute miles.

But I know. I did it. I did something that I never thought I'd be able to do. I am not a runner. .... but I guess, since I run several times a week, own shoes designed for running that cost more than $30, and can actually run several miles (WITH HILLS!!) at less than 10 minute miles... perhaps I better start changing that thought process. I am not a born runner.... but maybe I've made myself one.

Incidentally. I have to comment. The Chicken Farmer 5K had the best mascot I've ever seen. The guy that was the giant chicken was having so effing much fun that it was impossible to not have a good time. He was high-fiving, smiling, pep-talking... the whole works - despite it probably being 50 million degrees in that suit. He even jumped in the lake at the end, with a trail of children behind him. Well done, Giant Chicken Guy.
Oo! And some pictures! 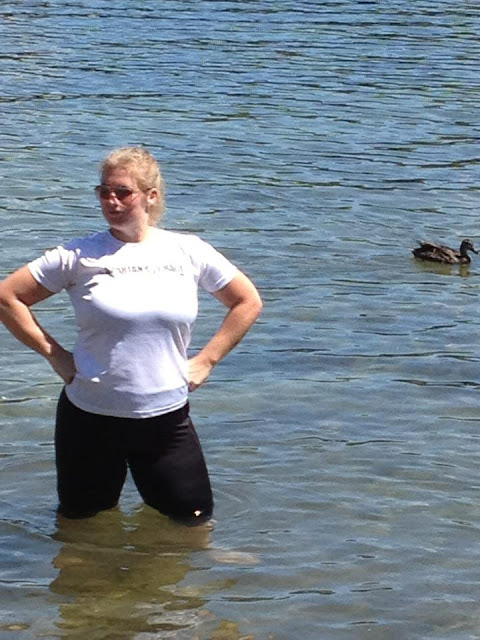 This may be my favorite picture of the summer, thus far. Post-race, my feet were hot and my knee was feeling angry, so I decided to wade into the beachy area with some of the kids. (and no, I didn't think twice about going in up past my pants. Thanks, Spartan Race! I have complete disregard for what I'm wearing now. LOL.) So, I'm icing my legs, and Sara decides that I should strike a pose. Joking around (sporting my Spartan Tee!), I strike this one, looking appropriately post-race badass, as anyone can be when they're standing in a like. Then along came the duck. Who really wanted to be in the picture. It made me laugh.... a lot. I'm not sure if the duck ADDs to the feeling of badassery, or detracts. I almost look like I'm standing there completely miffed that the duck is in my lake. LOL.

Anyway, Good Times were had by all, and you can bet your chicken feathers I'll be back next year. :-)

My knee was back to being weird again, so I took a swim early this afternoon for about 30-40 minutes to try and stretch it all out and make it feel better. It definitely helped, at least temporarily.

Stacey and I decided that since it was a lovely sunny Sunday, we should also go tackle a local park of ours that's full of beautiful trails and supposedly a "fitness trail" with stations to complete.

The stations left a lot to be desired, as did my complete lack of sense of direction while trying to follow the crudely-drawn maps... However, we had a fabulous time running all around trying to locate all the stations, and decipher what we were supposed to do. Nothing really fabulous, but I did discover that there IS a set of adult-sized monkey bars to practice on!! Woot! I got across them twice today, without falling... of course, theses are dry and not muddy, like they always are at the races. But I figure, if I can practice on them, I'll only get better! Before the season is out, I'm determined to conquer them at a race. AROO.
Also, the trail did have a set of parallel bars that was an interesting challenge. I was able to walk myself on my t-rex arms ALMOST halfway across them. I couldn't quite make my halfway goal and my arms were all done.... but, I see some practice in my future... HMm.

All in all, an hour or so running around in the woods, on a low-key Sunday, you can't go wrong. I think for future expeditions, I'll skip trying to follow the fitness trail and just run around the trails... but Monkey Bars, watch out. I'm coming back for you.