You can't build your reputation on what you're going to do. —Henry Ford

Well, training hasn't exactly been grand, of late, BlogLand. Through no fault of my GT or training program, and entirely the fault of my brain. We're in our usual winter slump, where the lack of light makes mornings impossible for me, and my body more lethargic than it should be (Hello, Seasonal Affective Disorder! Nice to see you again!). The funny thing is, exercise helps with this.... but you have to figure out a way to get yourself to the exercise. I've been... less than successful. It is mildly comforting to know that this is a usual, seasonal event for me (this is why you keep training records or blogs, people!), and it will pass if I just keep working at it.

So, as Sunday rolled around, this week, it was time to do some work. On the schedule was my Long Run day. Right now, it's "only" 5 miles, as I get back into running regularly again. (Lesson of the Day: Do not ever fall off the wagon. Re-starting your training, as a result of injury, or laziness, whatever, is MUCH harder than when you first began.) It was cold, we had a high-wind advisory and I was really not particularly looking forward to it. However, as I said, it was long run day on the schedule, I live in Vermont and sometimes it gets cold, and if I waited for perfect conditions, I'd never do anything. No. Excuses. Get ass in gear.

In an effort to make this as least painful as possible, I called up Partner in Training, Stacey and suggested a change of scenery. We headed over to Shelburne Farms, which happens to be a bazillion, beautiful acres of museum, working farm and general awesomeness. We learned that they had a 5 mile trail loop that went around the property, so it seemed like a perfect way to get in the miles, while giving our brains a refreshing new view to look at.

As I sat sideways in the car, lacing up my Oroc's, the wind was so hard, Stacey couldn't hear me talking to her, and I swear, the door of the car (open), almost blew off. Craziness. But yet, we were Spartans, and be damned if we weren't going running. *puts on more layers* 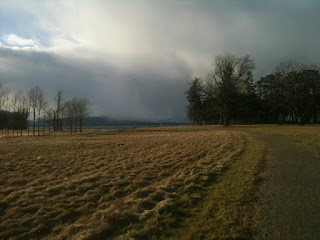 We got moving, and I admit, it feels good to get the body in motion. Outside of the crazy wind, it was a pretty and beautiful day out. We ran. I was pretty sure I was dying. Not cardiovascularly (as in, I could breathe okay), but my legs were crying. We weren't even a mile yet. They just need to warm up, I told myself. I was pushing.

The ugly miles wore on. My legs, who just haven't been putting the run time in, felt like we'd never run before. This was HARD again. I had to ask Stacey to stop to take a couple of 20 second walk breaks here and there. My legs felt like lead. I was not happy. Frustration was building.

I tried to remind myself that it only gets better, if you work through the hard stuff. So, I kept running.... albeit, very slowly (our average pace seemed to be just under a 12 min mile). But, it was either go slowly and complete the 5 mile task, or go faster and end up walking back to the car. I opted for slow and steady.

However, slow gives you a lot of time to think. I was thinking about how much harder this has gotten since I gained about 20 pounds of "holiday/injury weight" back. I was thinking about how 5 miles was an "easy" run. I was thinking about how I was consistently running 10 min miles and gunning for a sub-30 5K. Now, I didn't feel like I could run a 5k without stopping to walk a few seconds. This is not where you want your head to be, during your workouts. Ultimately, when it comes down to it, if you're doing it, that's what's important; not the coulda-shoulda-woulda's... not the "before"s or frustrations.... just the fact that you are out there, getting down to business, working on the body that you have -at that moment.

It's true. Staying in the routine of a Healthy, Active Lifestyle is not the easiest for me, because I grew up for almost 30 years in a carb-loving, not particularly active household. I'm retraining 30 years of programming. Yes. What I want to do is sit on the couch, drink hot cocoa and watch a movie... but NO, what I'm going to do is suit up and go for a run. THAT is not an easy transition, my friends. However, it is about making a choice. It is hard, but I'm choosing to fight forward, as I a) want to be healthy b) like how I feel when I'm healthy c) genuinely enjoy the activities I now pursue and d) feel better, less stressed and more positive when I'm on track. That seems like enough reasons to keep going. The hard part is reminding yourself of those things, when you're not feeling them so much....... or it's real cold out. 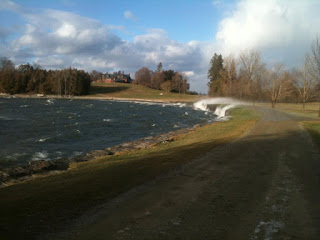 My tactic was this. Take in the wonderful scenery. To the left, you'll see one of the paths we ran down. That's a huge historic home (now an Inn) in the background, and  Lake Champlain busting over it's shores. LOOK at that. My legs may have felt like lead, but I am lucky to have places like that to run, lucky to be able to run, and lucky to have an excellent running buddy to push me through it. I have to make a note about this path we were running on; the wind was so hard that it was blowing the waves up and over the containment wall (see picture). This resulted in a cold spray that intermittently covered the path. Rather than run around, in true Spartan fashion, Stacey and I decided this meant we just needed to sprint it. We got sprayed. But we laughed and ran faster. Those moments make for a good run: when it doesn't seem like work, and you're playing again (maybe this is why I like Obstacle Races?).

I vowed I would run - non stop - the last 3/4 of a mile. Slow and steady I chugged along, and made sure not to lose Stacey, just ahead of me. Right, left, Right, left.... after a loop around the parking lot (couldn't stop until the GPS read at least 5.0 miles!), I trotted to a walk, and BOY did that feel good. My heart rate was coming down, my legs were warm and I had done it. Mostly against the will of my legs, but it was done, the miles were put in, and I was back on track. SUCCESS.

The week following, to date has not been great. I've been focusing on my eating to make sure I'm getting the weight down again. Vermont has been having a sub-zero cold snap (seriously, yesterday was -4 as a HIGH.), which means I'm not running outside. I draw the line at sub zero. But, I'm attempting to motivate myself to do home workouts. I have more than enough equipment and expertise to do so. No excuses. 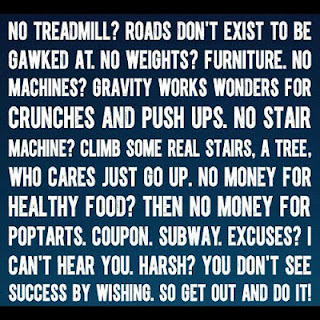 So. Yeah. That's kind of where I am right now BlogLand. Trying to overcome the season and get back to basics. Making real small goals so I can feel successful again, rather than frustrated. Pushing to get the number back down on the scale and up on the mileage.

One foot in front of the other....
Posted by What A Beautiful Wreck at 2:23 PM