So, as promised Blogland, this week I got to work with some new stuff - despite being a little sick.
I apparently got this annoying sort of head cold thing that hit me hard for like 24 hours, but was just a nagging stuffy sinus and such for a few days before and after. Happy to report I feel pretty much 100% again, going into this weekend (YAY!).

After spending Sunday recuperating from the powerlifting meet and trying to ward off the pending sickness with a lot of hot tea and good food, Monday meant I was back at it!

We officially started the Couch to 5K program. WOO! For me, I should probably put an (again) at the end of that sentence, but really just semantics, right?

Holly (who's fault this round of C25K is), Stacey and I got together and prepared for battle. Day 1 always seems like the hardest to me, as you're filled with "the unknown"... like, you don't know what it's going to be like, if you can do it, etc. etc.etc.... just question marks. But, I told myself that I should STFU, as at least I'd done this before and more or less knew what to expect (and knew I could do it), whereas Holly was on her first round of this program EVER. She was the only one who got to be nervous on Day 1.

Despite "waiting until Spring" to start our C25K, April 4th graced us with 32 degree temperatures, snow in the air, and ice on the ground. This is not the ideal way I'd introduce a budding runner to running... but, at least it'd all be better from there?

I was set up to be the "pacer" for this running expedition, who'd note the walk and jog segments. That's a big responsibility people. Try not to run to fast, don't run too slow, geesh. Since it was Day 1, I went at a real easy 13ish minute pace, so everyone could figure out where we were at. I'm happy to report that (despite dodging ice puddles), I was easily able to complete the minute intervals of running that Day 1 required. Perhaps all my worrying about being so huge and running were unfounded?

Stacey, our entertainment for the run, kept us all laughing and amused, while we got through the work. Holly - our newbie - completed D1 like a boss, with no complaints, no real struggles, and all smiles at the end (maybe I didn't run fast enough!?). Mission accomplished!

I took it easy on CrossFit this week, as my body/breathing just weren't up to speed, but Holly and I then caught at Zumba class on Wednesday.

I admit... I phoned that one in HARD. I thought I felt okay going into it, but as soon as we started moving, my body was like EFFFF this. I had no ooomph, definitely no jumpy-jumpy's, and zero sass. I gave it all I had at that moment... which was probably like 50% of normal. I still got the blood moving a little bit for like 55 minutes, broke a little bit of a sweat... but man, that was rough. Sometimes, Blogland, it's just about showing up and going through the motions.
I definitely went home, hydrated a lot, and then went to bed super early. Always listen to your body!!!

I woke up Thursday morning feeling 100% better. Nothing like a good sleep (and a lot of tea with honey) to get you fixed up.

Still took it easy and skipped bootcamp and such, but Thursday was slated for Day 2 of C25k, so I dutifully spandexed up for an easy romp through the cool weather. It was only drizzling on and off when we started, so all seemed well. I generally find it pleasant running in the rain, as did Holly and Stacy, so it seemed like it was going to be a good day.

D2 is the same workout as D1, so there were a lot less nerves going into this one. We'd all done day 1, we just needed to do it again! Inadvertently, I set a bit of a faster pace (around a 12 min/mile) this time, driven on by the rain I think. Nonetheless, my partners in crime kept right up and we completed our session without incidents or complaints, under a slightly rainy and grey sky.

Where we run is about 1/4 mile walk away from Holly's house. We had literally reached the end of our path, could see her house a 1/4 mile in the distance.... and the sky opened up.
The rain (now cold) was driving down and blowing nearly sideways, soaking us through, in a matter of seconds. As we rushed for cover (Holly said, "I think I've got one more run interval in me!!"), it began to solidify and pelt us with sleet? hail? That was... not comfortable.  Seriously, at risk of sounding cliche, it was coming down in BUCKETS. The jacket that was "water resistant" enough to keep out the light rain we'd be running through, suddenly took on water like the Titanic, soaking me to the skin.
Thankfully, Holly's mom pulled up in her car to rescue us! YAY!
We were definitely wet, and getting cold... but Wk 1, Day 2 - DONE!

Tomorrow, we take on Day 3 to finish out our first week and I couldn't be happier. It feels really good to be out running again (Dare I say, I missed it?). It is also nowhere near as awful feeling as I thought it was going to be at this weight. Just goes to show you people, you can run/get fit/workout at whatever weight you want, as long as you pick the right plan. So far, C25K has been really accessible and the intervals gradually get longer, so you have plenty of time to adjust. Assuming I stay on plan, we should finish up around mid-June and start prepping for a 5K race milestone! (MORE MEDALS!!!!!! AND T-SHIRTS!!!!)

After a mild week, with just a little C25K, today it was back at it, with a training session with Robyn. 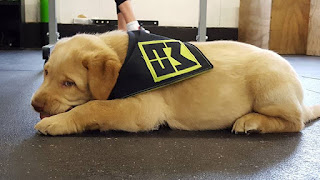 First off, let's talk about the important things. I got to me the newest addition to the gym - Spealler - a 7 wk old lab puppy.

Sparing you most of the gushy details, I definitely smushed his face, rubbed his belly and laughed at his silly puppy run. This little goober will definitely not be short of adoring fans, as I'm pretty sure I saw every person there stop to pet him. #GymDogs are the best. Instant mood-boost for the day!

Continuing on our quest to wreck my shoulders (and maybe make me less t-rex-y), Robyn started us out with some ascending weight complexes.... Push Press, Push Jerk, Split Jerk. Worked up to a solid 130-ish, I believe (limited by the push press), but it was not without stupid moments. I swear, my brain was on short circuit today. Definitely had to concentrate hard to clean up my Split Jerk, which is not an intuitive movement for me. Dear Right Foot, I really need to step BACK with you, before good 'ol Left Foot jumps the gun and steps to center first. Geesh.
Nonetheless, it felt good to be pushing around some weight again (even if it was overhead...). My shoulders and back muscles definitely feel as though we did something....

I should clarify. Wall Balls SUCK for me. Not because they are hard from a muscle standpoint (my legs are perfectly capable of squatting 14# and exploding up to toss it)... but DAMN if I am completely unable to breathe doing them.

I started out with an optimistic set of 15 out of 30, took a few deep breaths - still feelin' good! - and closed out those wall balls with another solid set of 15. Yeah. Nailed it.

You know what I found is really hard to do, when you can't breathe? Sit Ups. Followed by Jump ropes (although, I only tripped once, and did all of my sets as I planned to!).

As we entered the second round of wall balls ("Only" 20, right?!), I began to feel as though this is how I was going to die. I had set out to attack two sets of 10, when that quickly became a pipe dream. By 2 sets of 10, I clearly meant hope for 4 sets of 5 and Try Not To Die. When  jump rope is going to be your "rest time" you know it's going to be a rough one.

Round 3, I did a little celebration! Only 10-10-30 and then I would be done!! That breathed a little more life into my efforts.... only to realize that the clock was still going, and I definitely had a few minutes left. *long string of expletives*

SURE my lungs were about to explode, I stepped up to do 30 more wall balls. They were not pretty, folks. Or fast. Or coordinated. BUT... they got done.
Miraculously, I even manged to get 12 deep into my next round of sit ups.

Thankfully, the clock saved me and I starfished HARD after this one.

My quads would like to keep reminding me that we did 90 wall balls today, and they're not happy about it. Meanwhile, my shoulder and back muscles feel like chiming in their two cents as well. Oh boy. Tomorrow might be reallll rough.

Tomorrow though, is wk 1, day THREE of our running program. The last run, before we can say we successfully completed Wk 1. WOO.

Sunday, it's back to Hatching out my Squats. It's definitely going to get interesting this time around with some bigger weight on the bar.... but, Hatch says I can, so I will.

With that, I'm off to find some food and perhaps a bit of foam rolling.... (I'm coming for you, Quads!)


Posted by What A Beautiful Wreck at 6:48 PM