I had to spend countless hours, above and beyond the basic time, to try and perfect the fundamentals. -Julius Erving

Race Season seems to be entering full swing, BlogLand. It was another crazy-tastic weekend. I'm sitting here drinking water (c'mon rehydration!) and wrapped in a blanket (just got out of the ice bath...), and ready to tell you all about it! Wee!

Day 304:
A lovely Saturday morning at CrossFit. The weather was great (75 and sunny!), and the WOD was evil. First, a little strength activity by doing some team round-robin Prowler Sled Pushes. Nothing like AMRAP in 10 minutes. Go go Gadget, Legs!
The WOD that followed was no cupcake either: "Power Helen," which turned out to be:
(3 Rounds of:)
200m run
21 pull ups
15 overhead kettlebell swings
15 box jumps
15 burpees
Waaaa! This one kicked my butt. One, my pull ups still suck. Still using big black helper band, and had to cut the last two rounds to 15 each. GRR. However, KB was at 22# (could've been heavier) and box was 20". Burpees. Suck. Oh, incidentally, apparently tomorrow (Monday!) is Buck Furpees Day, as declared by Spartan Race.....

So, first I would like to extend my apologies to Heat Event Management and the town of Amesbury, MA. I RAGINGLY underestimated your "little local mud run," that I decided to do for fun, when I couldn't attend CMC this weekend. Mad Props to you all... I'm tired!

The fun began when I arrived at fellow Spartan Chick, Peyton's house on Saturday night for a pre-race sleepover. She'd picked up our packets/numbers and we discovered that not only did we get ANOTHER fabulous shirt (seriously. Heat Event Management races always have great shirts. For reals.), but we would be receiving an equally as fabulous pint glass. What I really got a chuckle over, was the giggle someone must've had when writing our team name on the envelopes, etc.: 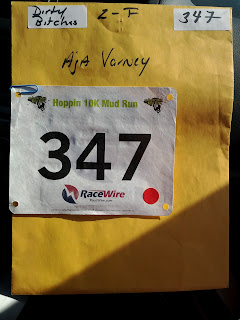 As race morning dawned, we ate our oatmeal and bananas and gulped down our coffee (essential!), and headed out to the race site (Woodsom Farm, Amesbury). First, I noted how incredibly beautiful it was. It was going to be an absolute pleasure running all over the rolling grassy fields on a beautiful sunny day....... Then, I did have a momentary check of realism when the "beautiful sunny day" turned out to really be 80+ and baking sun... and those "rolling grassy hills" turned out to be really tall grass on some really big hills... LOL. Nothing like having a bit of a pollen allergy and running through a field!

BUT. It was beautiful. We were lucky to have two legs to run on and some great friends to go out and play with. Bring it on!
We drank some coconut water to help hydrate our (already-sweating) bodies, and prepped for battle with the unknown course: 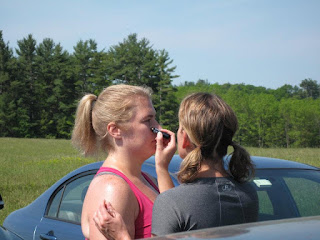 After scoping the costumed groups (they won a key to the city for best costume!!! Had I known THAT....), and watching the Elite Heat gather and head off down the road, it was time for the Red Dot Heat...
Oddly, I found myself pretty calm for this run. No nerves. I think there is some confidence in knowing that if you can survive a Spartan Race, you're probably decently equipped to handle whatever any other mud run was going to throw at you. I was pretty sure there was no 8/10 of a mile barbed wire crawl, or muddy rope climb. There also were no penalty burpees... (Hallelujah!) 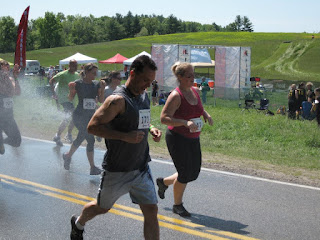 Our starting line sent us off down the scenic paved road, and off out of sight. Marketed as a 10K length with 15 obstacles, I figured the road was our lead in to the first of our obstacles, so off I happily trotted. I was so thankful that 20 feet out of the starting gate, the Amesbury Fire Department was taking extreme joy just spraying down the racers as they began their day. It felt amazing to cool off. Ahh... and I would also like to submit the above photo evidence as proof that I do, in fact, have T-rex tendencies. Just picture me "rawr-ing" here!

And we ran. On the hot pavement. In the sun.

And ran some more.

As we hit the Mile 1 marker, I began to question this decision. We'd already run a mile on a blazing hot road and we were continuing down the road as far as the eye could see. While running. Welcome to my idea of hell. Straight road running, in the heat. Bleeeehhh!!
Although, I knew there had to be obstacles in there somewhere... so I chose to view this as the first of them.

Road running becomes very mental for me. Particularly when my calves decide to be uncooperative and cramp up, or it's 4 trillion degrees, or there is a big hill (remember those scenic rolling hills....?). I had two fabulous supportive and motivating ladies with me, Peyton and Hawli, so I ran through the battery acid in my calves, ran through the salty sweat running into my eyes, and just kept putting one foot in front of the other. We'd HAVE to get to the trails soon...

As we ran the first 5K (yes, the first HALF) on the road, we did stop for a couple of walk breaks, as it seemed pertinent. When it's 80 degrees and you're running on pavement and exerting up hills, etc. it is just plain *smart* to walk a little bit every once and a while to let your body rest a minute. As we crested the top of a particularly large hill, still smiling and joking (even the heat can't put a damper on our awesomeness!), I mustered a little cheer for the fact that we were finally hitting the grassy trails - AND there was our first water station in view (ohthankgod!). Nothing like running a 5K road race, then knowing you're in for another 5K trail/obstacle race! Yikes!

The first couple of obstacles were nothing serious... a few little hurdles (like knee height) and then more running. Up, down and around those "scenic" rolling hills.
We ran some more.
More running.
(sensing a trend?)

Up ahead, I saw something I was familiar with - a set of vertical walls. Probably 4 feet tall? You know, a height you can theoretically manage without a boost from a burly man, but at an awkward enough height that you do have to get a good jump on it.
I am happy to say, I got over those bad boys ALL BY MYSELF. There is something about tackling a 12 foot-er at a Spartan (even though there was help and support), that makes you internally know that anything is going to be easier than that - mentally and physically. Anything. Tackling that 12 foot wall a couple of weeks ago (my biggest fear at the time) was an excellent metaphorical reference for many things in life. Today, I decided to translate it literally. Surely these wee little 4 footers wouldn't stop me! Up and over (with some semblance of coordination, thank you!).

Some more minor obstacles came and went, and we reached one of my favorites - the tire carry! Simple and evil: pick up tire. Carry tire to the top of the steep hill and back down again. However, thankfully, my training regularly includes trekking around weird objects like rocks, tires and sandbags, over various distances and terrain. I slung that (felt light!) tire over one shoulder and marched up that incline, passing a few dudes along the way. I am pretty sure that they thought this would be a "little local mud run," too. They had stopped on the hill, put their tires down and were panting. I am VERY proud to say that me and the rest of the Dirty Bitches just kept trucking. "Chicking" at it's finest.

After that, we ran. More. More running. Through the fields. Up the grassy hills. Around the pollen-filled corners. Running. (admittedly, with your occasional walk break, because damn it was hot).
We hit a few more relatively incidental obstacles (this may have been my only complaint. Some of the "obstacles" were very... simple?), but at least they broke up the running.

Somewhere along our trek, right about mile 5 I would guess, it happened. Junyong Pak (the Pak-Man!), who currently holds the title of World's Toughest Mudder and is of Spartan Race Royalty (Death Race, Beast, etc.), passed us. With his tiny adorable dog. Yes, BlogLand... The Pak-Man had already run the race, WON (with a ridiculous time of like 38 minutes or something), gotten his dog and re-run around and lapped us. The elite heat had only gone off 7 minutes before our heat. If THAT doesn't make you feel slow, I don't know what will. Then again, Mr. Pak is a beast (and I mean that as a compliment). We watched him start his run and it looks positively effortless. However, getting owned by his tiny (but apparently equally as beastly!) dog is another story. LOL.

In the last mile, things started to get a little more real. We were in view of the spectators, and clearly, this is where they put the big obstacles. As we crested a big grassy hill (they were no longer scenic), after going UP an inclined slip and slide, we saw our first big challenge of the day. The Wall. In many obstacle races, it seems that this same type of obstacle would be seen soaped up to make it harder... but here, they went for dry, but extra long and steep:

My girls and I tackled and beat this incline wall, with no hesitation. Take that Spectators. Incline Wall Rope Climb, Spartan Chicked style!

It was down and around and back out of the field and onto the road for the last run portion, before coming to the last series of close-set obstacles. First, an awkward PVC pipe up and over kind of thing. This, my friends, is MUCH harder than a wall, because you have nothing really to brace your feet against. They're just swinging. This is a lot of core and upper body control here, I found. I did this with a lot more coordination than I anticipated from myself, conveniently, right in front of the NuVision photographers. Here's hoping for a cool race pic! In the meantime, check the obstacle:

We were in the final push. We could practically taste the finish. In my head, I was picturing the biggest, coldest glass of water ever. My mouth (despite the more than adequate water stops!) felt like the Sahara.

Then here we came to the second to last obstacle. A cargo net/container up and over. I bet the empty-container business is booming these days, with the popularity of Obstacle Course races. It seems like they all do something with them! This was a relatively straight forward one, other than the fact that the cargo-net was loose-ish, making for some swinging, etc.