Ow, BlogLand, ow. My legs are so beyond done right now, I can't even begin to express it in coherent words.

So, today is Monday, and as part of my updated training regime until the Amesbury Spartan Race, it was Sprint Night, Part 2. Sprint Night Part 2 means I do my usual sort of sprints (200m or half track), but I do 6 of them... instead of the usual four. In my head that seemed like it was going to suck, but would be a manageable level of suckage. After all, it was only two additional sprints.

I felt a twinge of worry when I set out for our warm up jog with the ladies. As we commenced a bit of chatter, I trotted down the sidewalk, assessing the fact that my legs did not feel "fresh" in any way. I hadn't run or sprinted since Thursday (400m sprints)... I was really expecting my legs to be feeling a little more up to snuff. I convinced myself I just needed a warm up and continued along our path.

The first sprint wasn't too bad. While it wasn't pretty, I had enough power in my legs to get a respectable time, in keeping with my usual times at 200m; Lap One: 38.67

Then, BlogLand, the slight sense of doom kicked in. The feeling in my legs that I had after that first sprint was typically the feeling I have after the 2nd or 3rd sprint, usually. No matter, I thought, I was just a little stiff from working hard on Thursday night. I'd just need to power though. Power through I did, as best as I could, to a Lap Two: 40.61 Again, not my greatest time, but since I was sprinting on tired legs and the fact that 40 is still within my "consistent" time rage, I was satisfied with that.

My legs, on the other hand, were feeling like completely empty vessels. Like, I was trying to eek out more energy than was in there. While you can run on mental energy quite a long time, sometimes, your body does have physical limitations. I felt like I was finding mine, today. Lap Three 42.54. I was sensing a quick, downward spiral, so I did what any rational human would do to stave off a freak out: I texted the GT for some on-the-spot workout advice. After this lap, I wasn't sure I'd be able to make it to six sprints, without some crazy slow times. What to do?!

On the GT's advice, I tried one more... pushing as hard as I can, but checking the time at the end. Lap Four: 44.59. HORRIBLE in comparison with my usual 39-40 range. Clearly, my legs were blasted still from the other day, and something had to give here. New plan on the fly, before I got too caught up in the fact that there was no way I was going to make six of these sprints... The GT prescribed a longer recovery period for the next couple of minutes, to give my legs a little more time to get themselves together between bouts.  And then I attempted one more lap (Spartan up!).

Lap Five: 43.62. So, clearly the little extra recovery time helped, but BlogLand, my legs were spent. I wrung every last iota of energy out of those screaming quads and informed my hamstrings that there was no other option. Still, it was a fight to improve my time below 44 seconds. My body fought me the ENTIRE way on this one. I felt uncoordinated, ungraceful and not too powerful.

For a little bit of a bonus round (... did I have *any* more left?), I decided to try a 100m sprint with my Sprint Buddies. Yeah. I was powerful for the first 10 seconds, then I gracefully bowed out and trotted down to a barely-a-run. I had found the threshold of being able to push. As the three of us attempted to sprint that 100 (so short, right?), I saw them both pulling ahead of me and activated my competitive spirit. Even that couldn't save me. I had no afterburner, no secret stash of energy... nothing. Although, I guess I did it right, then... it means I left it all out there?

I was a little disheartened, BlogLand. Usually I can bang out 4 solid sprints at 200m with a consistent time. I certainly could not, today. Expressing the difficulty of this to the GT, I was told to remember what it was like when I was first running 3 miles, and how hard it was to stay running for the full 5K. I guess I certainly have graduated. While I should always be working at 110% for sprints, the GT advised I take a sense of accomplishment away from the fact that I CAN run a 200 and 400m sprint at all. There was a time that that wouldn't be possible. I remember when I jokingly tried a 400m sprint and thought I *would* just die. On Thursday when I did them, I just for real, *wanted* to die. haha

So, Lessons to be taken from this.... You are a work in progress. You'll never be "there" wherever that is, so it is good to appreciate what is smack in front of you. Like 5 completed 200m sprints (not 6.. but soon!), a regular workout night with friends, support through the most difficult workouts, accountability to get them done, regardless of how you think you are doing, and the fact that I'm healthy and strong and still progressing forward in my quest toward a healthier life.

Tonight's Sprint are not to be looked at as a "fail" because I couldn't do my WOD as prescribed, but merely feedback. What the GT and I discovered is that I will need a little more recovery time between sprints, when I am doing two sprint wods in a week. I have a new goal to reach (six sprints!). I have a new challenge to beat into the ground and overcome. Who doesn't like that kind of motivation, here and there?

Really, BlogLand, it's your perspective that ultimately determines if you succeed or fail. If I chose to stay in the negative mindset, where I look at tonight's sprints as too hard and a failure, where does that get me? The fast lane to quitting. If I choose to look at this as a "learning experience" or feedback as to the place I'm in with my training, it gives me a positive hold to stand on. Yeah, I'm not satisfied with my performance, but that means I have something to work towards.

Now that we got the serious WOD out of the way, I have to back up and tell you about my active recovery Sunday shenanigans. STILL on Sunday, my quads were stiff from sprinting the prev Thursday and in need of some movement to get the blood flowing again. PLUS, it was a really beautiful day out. New Me really likes to get out there and soak up every last bit of sunshine and outside that I can, whenever I can. (Never take this for granted!)

So, after a quick pow wow of options, the CG and I decided we would do some kayaking, snorkeling and swimming on the lovely Lake Champlain. 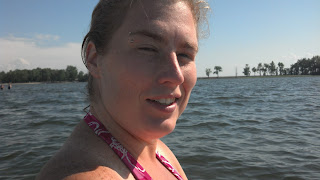 While I'm a pretty competent kayaker, I'd never been snorkeling before, which certainly put a new spin on things. Let me tell you, BlogLand... as graceful as divers and snorkelers look when you see them on TV, you do not magically turn into a dolphin or a graceful mermaid upon donning fins. I nearly drowned myself a couple times because my brain couldn't figure out how deep was too deep when swimming, before my air tube was underwater.... and maneuvering those fins definitely takes some muscle and practice. However, I will say that despite the fact I was flopping around underwater like a wounded whale, I had SO much fun. We got to poke at the zebra muscles that are rampant in our lake, as well as see all sorts of random stuff. Granted, where we were was a little cloudy thanks to a recent algae bloom, it was a great practice ground. Next time, I graduate to bigger fish and rocks and debris! Wee! 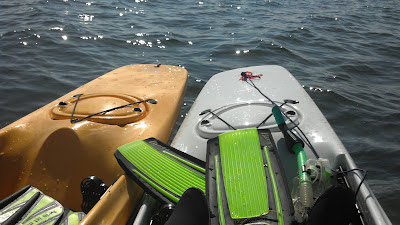 I would also like to take this time to note how much I have found I like the sit-on-top style kayaks! I managed to get myself out of the water, and back into my floating kayak even, without flipping it over! AMAZING. (I'm not sure I'd say it was graceful to watch me, I'm sure, but... ehh... it worked!). The paddle around was nice, too... as it turns out, there were quite a few waves and a bit of a current at times that provided a bit of an arm workout (active recovery day, yay!).

Annd.... I won't lie. My Spartan was showing, at one point. We were swimming around in the waist-deep-ish water, and joking around pulling our boat anchor, which was only 5 pounds. Feeling unchallenged, one thing led to another, and this spartan chick was running around in the water, with the drag of two kayaks, one 5 pound anchor and one very good-humored partner-in-crime. Never miss a chance to get your mini-wod's in, BlogLand! Recovery days do not mean sit on your couch. JUST sayin'.

With that, I leave you with some happy-faces for the day. Nothing like some sunshine and wonderful company to refresh your mental state and prepare for the week ahead! 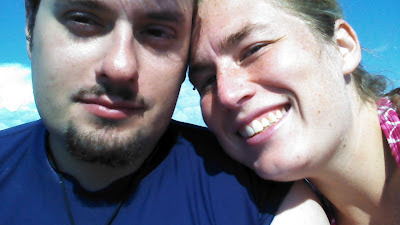 Posted by What A Beautiful Wreck at 12:49 AM