Discipline is the bridge between goals and accomplishment.

As per usual, while driving to work this morning, I began my dread of that evening's Sprint WOD. Yes, I know how beneficial they are. Yes, I know I'm going to do it anyway. But before every.single.WOD I decidely need to aknowledge the incredible voluntary suckfest that I'm going to put myself through. Insert regular dread and loathing.

As the day progressed, I got a couple of texts from my partners-in-suffering for the evening, both expressing a similar sentiment. Everyone was feeling lazy and unmotivated; my Inner Fat Chick was trying to convince me that it wouldn't be SO bad to take a day off...

I am happy to report that my girls and I Embraced The Suck in a big way and got our Spartan butts over to the track to bust out this WOD. Reaching the track, we found it was not as deserted as it usually has been, but instead was pretty crowded with people.... I had a bit of a momentary bout of FCS (Fat Chick Syndrome), where I thought, "OMG. People are going to WATCH ME?!" I had to remind myself that there are tons of pictures of me running now, I'm mildly competent, they probably don't CARE, and if they did and had anything to say about it... I'm pretty sure I could probably break them in half, thanks to all the CrossFit and Spartan-ish stuff I do. SO THERE. Inner Fat Chick, STFU. We were going to kick the ass of this Sprint WOD.

Lining up on the Start Line for that first sprint was touch. We were all a little whiny and moaning and groaning... My legs are still adjusting to Sprinting twice a week and weren't entirely sure they were on board with this, and my mind was still trying to talk me into the fact that 400m sprints were a good idea.

Away we went and, as usual, I felt pretty strong out of the gate and for the first.... maybe 150m. Then we came into the turn and I had to push myself a bit - but thankfully, I was fueled my my competitive spirit, as April was trucking along right next to me. I couldn't let her pass!! (whatever gets you through these sprints. lol). As we completed the first half of our lap, my body started to struggle. 200m is what it is comfortable with, and as I hit that second straight stretch, I could feel the power just drain from my legs. My lungs were heaving and I was still moving, but nowhere near the sprint power I would usually have. Careening through the finish line (Right behind April, DOH!!), I dropped to starfish for a moment on the grass. I just needed a moment to convince my lungs that there was still air in the atmosphere to breathe. I checked my lap time: Lap One: 1:40:52.
That lap time was not quite as fast as my fastest time last week, but considering this was my second sprint night of this week, I was pretty happy with it. Small steps!

After a much-needed recovery walk, my legs were protesting. I was feeling the activity in my quads and was just feeling tired. Nonetheless, there were two more sprints to do. Down to business and down to that starting line. The second lap went much like the first... about a solid half a lap of sprinting, then in feels like my lungs can't suck in any air - AT ALL. I'm DYING, I'm SURE OF IT! - and my legs are trying desperately to move, but the best we can do feels like I'm running through molasses. I forced myself over that finish line at the fastest pace I could muster (again, right behind April! DAMN.), clocking a Second Lap: 1:46:04.

Looking at that six second drop off, and acknowledging the feeling in my legs, I decided it might be best to touch base with the TortureMaster... er... the GT. Alfter telling me to take a little longer rest, the conversation went like this:
Me: Legs feel real empty. This suuucks! But only one more to do...
GT: Aim for 1:42 for the last one
GT: Fast Feet and Breathe
GT: Puke after if you'd like
Me: It feels like I can't breathe for the last half. Like NO. AIR.
GT: Breathe after, too.

Well, there's no arguing with that one... suck it up, get it done, was the message I got there. So, after a little more walking, trying to force my breathing back to normal, April and I found ourselves on the starting line for the third time.

This time, with focus: We had to go FASTER than we had done in the previous lap. Push a little harder. We were effectively aiming to empty out our legs of any possible remaining energy that might be lingering in there. 110% effort. We whined a little more. But it was just ONE MORE. ONE. I can do anything for two more minutes... even if I'm sure my lungs are going to collapse.

This lap absolutely crushed me. I'm not sure if it was the fact I'd done sprints earlier this week, or what it was, but this was incredibly difficult. I had a decent initial sprint, then I felt like I was trying to run with concrete blocks on my legs. I fought my body as April started to pull away from me in the second half, and I pushed to keep myself in the best semblence of a run that I could muster. It was not impressive, let me tell you, BlogLand. April widened the gap between us and I used my frustration to fuel the last push toward the finish line.
Last UGLY, HARD, EXHAUSTING Lap: Lap Three: 1:47:53
So, that's not exactly the 1:42 we were aiming for, but it was at least a much smaller time drop off than between lap two and three. Also, I was happy to note that this time (my slowest time this week) was at least FASTER than my slowest time last week. Is that an improvement or a fluke, I dunno.... but I'm happy with the progress.

Also, that I finished, with nothing left in the tank. How do I know that? Because this is me directly following Sprint Number Three: 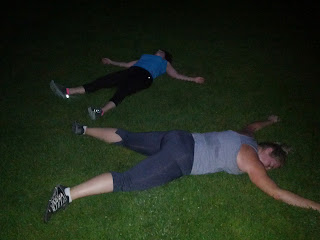 Yep. Face Down Starfish. A sign of complete DONE. 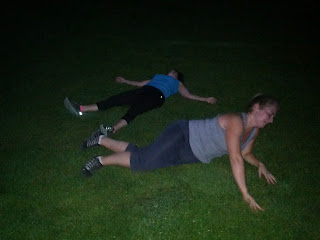 Next, we have the great camera work that caught my "Death Crawl" where I'm cursing my GT, proclaiming my death and wondering how I will make it home, because I'm sure I have absolutely no legs left.


Lastly, we have the quintessential picture of the evening, that really reflected our thoughts on the evening. We survived (look! my eyes were open!), but we were spent. 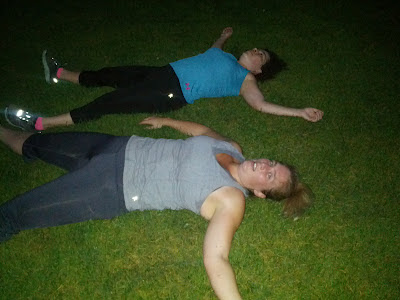 So.... yeah. Another Sprint Night in the books. I didn't die (I wanted to). My support system and cheering section (April and Stacey! Yay!), were in great form and suffered through our workout, with smiles and jokes the whole way. At least it we're going to die, we were going to die getting our Spartan on and we'd do it together!

Revelation of the evening: We collectively decided it would be acceptable to die/pass out/fall down as long as you did that while still attempting to sprint.... rather than quit and step to the side.

Oh, Amesbury Spartan Sprint (in a week!), you got some badass ladies headed your way!!!!
Posted by What A Beautiful Wreck at 12:28 AM