Well, BlogLand, it has been a few days since The Incident, so it was time to get back into the gym and back to work.

Yesterday was a personal training session with Robyn - oddly, one of my favorite points of the week, despite the customized torture she puts me through. Torture is one thing, but CUSTOM torture, geared toward your weaknesses, to make it extra awesome, is a whole new ball game. This was one of those days....

In the wake of the 16.3 hell of just not having enough pull in my back/arms or enough jump in my legs to nail those Chest to Bar jumping pull ups, Robyn decided we have a new project.

Our training session, (after a warm up, of course!) opened with 4x10 ascending weight barbell rows. Lats, you can hide no longer.
I worked up to a 103# barbell row for 10 reps, which was definitely working my back in ways it was not used to. It's funny to reflect that 103# barbell wouldn't even be a warm-up for my legs, but it was most certainly causing me to break a sweat in this movement!

After that, Robyn decided to hone in on another pain point of mine - CARDIO.

Cardio is hard when you're heavier than you should be. End of story. It can get better, but it's never going to be "good".  Needless to say, I do not particularly enjoy it, but I recognize the benefits of getting better at it... so, on we go!

So basically, you have 20 seconds of rest after rowing to complete that minute, you have whatever time on the minute you have when you finished jump rope, and 30 seconds after assault bike (which actually blends to be a total of 90 sec, with the minute of rest directly after).
The idea is to be consistent from round to round with the calories you're getting on the rower and the bike.

Well, I survived and mostly in one piece, but that Assault bike really sucks it out of you. Apparently, it gets harder, the harder you go - so it's not just in my head, when it feels like that!

Rowing is a strong area for me (go Legs!) so that was a good way to start... jump rope is decidedly not my favorite, but it's better than the bike.... BUT, if I could survive the bike, I could get a whole minute's rest (which was the shortest minute ever).

All things considered, I was a sweaty, starfish-ing mess after that, but got it done without too much issue (outside of a little whining about jump rope..).

For a little extra fun, we did tabata situps into planks...
So, 20 seconds of situps, DIRECTLY into 20 seconds of plank, with 20 seconds rest.
Like a MILLION times (I'm sure of it.)... or like, 4 minutes. Whatever.
There was much groaning, but again, I lived to tell the tale.

Today, my back was not really excited about me brushing my hair (do you know you use your lats for that?!), although, rolling out of bed was way better than expected (Yay, Abs!).

Given the amount of squatting and such I've been doing (works your core), plus the additional core-specific stuff, I've decided I must have an amazing set of Abs under that spare tire, somewhere!! We shall unveil them, someday...

Today was supposed to be Squat day, but I have this bad feeling like I'm coming down with the stomach bug my Mom had. uuuughh... pleeeaaassse no. Or if it's going to happen, let's get it out of the way quickly.

I'm supposed to go to Zumba tonight, for a little extra cardio in my life, but I'm leaving that one with a question mark as well.... stomach is TBD. Blehhh. Cue the crackers.

On that note, I'll leave you with this little gem, that I feel really encapsulates my thoughts: 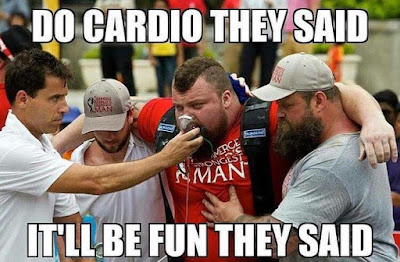 Posted by What A Beautiful Wreck at 3:00 PM