This weekend, it was time to tackle Open WOD 16.2! I felt okay going into it, all things continued, as I had A Plan.
My goal was to get into Round 3, although that seemed like it was going to be a huge fight, given the fact that knees to elbows was going to be a rough one for my grip and jump rope and I have a hate-hate relationship.
I'm THRILLED to report that not only did I get into round 3, I *almost* finished it!

Starting the WOD, the atmosphere in the gym was great. Something about The Open seems to really bring out the community feel, as everyone is fighting the same battle (It's Us. vs. Dave Castro!). Even better, my long-time Spahten friend and many-race battle buddy, was there visiting. We got our warm ups done, exchanged pep-talks and took our places under our pull up bars.

I was a little nervous, but having thought out a solid plan was really helping me be "okay" with what was about to go down. I admit, part of me was thinking that - worse case scenario - my WOD would only be 4 minutes! WOO! 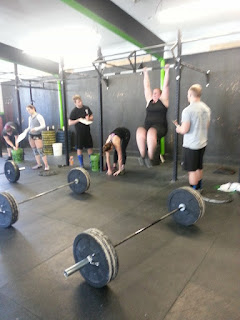 I took off with sets of 5 knees raises and was able to consistently bang out all 25 that way, with just a couple seconds in between each set. Right on target!
On to the jump rope, I took a deep breath and feeling good still, I did my two sets - 30 and 20 - right on point. No tripping, no getting flustered. YES.
I picked up the bar for my first set of squat cleans and threw up that 55# bar like nothing (the fact that it was so light caught me off guard a bit! ha!). There are some times that having one skill set like lifting heavy things, comes in handy!
I kept a steady pace and one eye on the clock.
BOOM.
Put down the 15th squat clean and looked nervously at the clock - TIME TO SPARE!!!
WHAAAAT?! I DID IT!

Had to squash that mental celebration a bit, because I knew I'd need all the time I'd banked to keep going, as I started to get tired. Stick to The Plan! 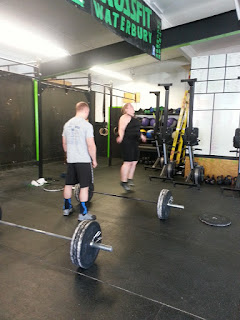 Onto the second set of knees to elbows, and I managed another solid 5 sets of 5 reps to get those things done. It really helped to take a lesson from my Man, the rock climber... don't over grip! There's nothing that's going to burn out your forearms and grip faster than the infamous Death Grip. The Death Grip is often the result of nerves or overthinking... I was not going to fall victim to that! I kept just enough grip to keep me on that bar and made sure to utilize a little bit of the swing momentum ( I wouldn't call it a kip... it wasn't that graceful. LOL!) to help keep moving.
Done!
Onto that damn jump rope!
Definitely starting to huff and puff a bit, but still felt pretty good and strong. A deep breath and on to the jump rope. A little less graceful than the first round, but still manged to pull it out with two big sets. YES!!! Made it to the barbell!
Amazingly, it seemed I was outrunning the clock, noting that I finished the jump rope at the 10:24 mark. A whole minute and a half to bust out like 13 squat cleans!

Now, I will admit (Sorry Robyn!), the squat cleans turned a little more into power cleans and front squats. Weirdly, the fact that the weight was so light (for me) at only 75#,  actually made it harder, as I didn't NEED to get under the bar to clean it. Therefore, I was off and running, up and down!

Looking at the clock, I realized I had started to slow a bit (..can't... breathe... huff...puff...) and had lost some of the time I'd banked. Time to kick it into high gear.
BAM - kick out those touch and go squat cleans!
Putting down number 13, I look at my judge, who enthusiastically smiles and waves me on! 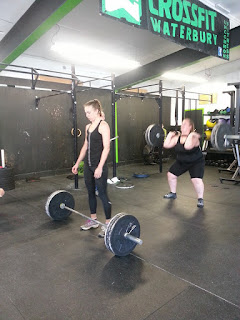 HOLY SHIT. (Yes. That was the actually thought process).

I MADE IT TO ROUND THREE!!

Okay Self, I thought, just keep it consistent!

Grabbing the bar in that third round definitely had a different flavor. I was out of breath and wasn't recovering as much as I needed to. This is where the decision was going to be made, and I wasn't ready to quit yet.

I definitely lost some time here, doing sets of threes, but hoped I could make it up with consistency moving forward. 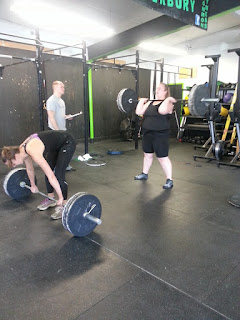 I was thrilled to be back at the bar, even though it had gotten reloaded to 95#.

.... but I was starting to fade a bit. It felt like my lungs were on fire, I couldn't breathe.... but I looked at the clock and realized I didn't have time to breathe.

Squat Cleans devolved a bit into muscle cleans and front squats - again, lost some time here, but was able to be consistent. With the clock catching up and the community cheering me on, I pushed to try and bang out those squat cleans, as I knew it was going to be close - I MIGHT be able to make it into Round 4.

Sadly, my cardio-(in)capabilities made the determination on this one, and the clock beat me at 12 minutes - with only 3 squat cleans to go.

I would've loved to crack round 4, but it's okay. Honestly, I didn't think I'd make it as far as I did, so I'm calling this one a major victory.

On finishing, my grip was blown out and I was drenched in sweat and dying a little bit, so I think I left it all out there.

In retrospect, could I have made it through that third round? Yeah, maybe. There were a couple of places I think I could've saved a little time, or pushed a little harder and cracked into round 4. But, isn't there always? I'm really satisfied banking a score of 261 for this WOD. Amazingly - out of scaled women in the Northeast, this was a good enough score to put me smack in the middle of the field! YEAH! (NOT LAST! EEE!).

The hardest part of this whole WOD was actually the aftermath, for me.

I was feeling pretty awesome coming out of the WOD. I made a good showing and pulled out a score that many people would be happy with. .... Then I looked at the pictures.

It is super hard to feel good about what you've just done, when you see the pictures and they don't reflect the way you feel. I know I'm a big person right now, but I worked hard as hell and I really wanted to see the pictures that reflected that success.

Pictures came out and I got some action shots this time.... and while they're not as bad as the shots from the competition a few weeks ago, it's really disheartening to just continue to see the mismatch between how I feel and how I look. UGH.

I'm working hard at refocusing on the accomplishment. Gotta keep your head in the game and keep taking steps - however small - forward.
Today, I focusing on the fact that I not only got out there and am competing in The Open, but I'm doing it as a (gulp) almost 300# women. If I can gasp and pant my way through this shit, anyone should be able to!

Now, we rest, foam roll and gear up for 16.3 to come. I'm happy that we've crossed jump rope off the list, no more burpees..... I'm thinking we're going to see a row in there sometime soon. I would REALLY, really like to see something like a heavy barbell ladder, or something I can really dive into. However, regardless of what is to come, I'm happy I stepped out of my comfort zone and have jumped in to The Open.

Posted by What A Beautiful Wreck at 7:43 PM