It was Sprints Day, BlogLand. *sigh* Let us discuss how much I loathe and despise them. Intellectually, I recognize their value and I have read up on their purpose/benefits, but they suck. They suck HARD. I hate them. I guess I hate them because they are exceedingly difficult. Like there is no push yourself "a little" more. It is max effort, the whole time. Ick.

Tonight's Sprints did seem to go marginally better though. Short warm-up jog out to the moonlit track with my usually Up-The-Hill running buddy... On Tuesday nights, she comes down the hill and helps me get through my sprints!

I admit to her at the beginning of each session that I have been dreading this (because I do), and that I don't want to do it (because I don't), but I will (... because I WILL.), and thank you SO much for suffering through this with me. It can't be all that interesting to watch me Sprint-Die. Sprint-Die. But, she endures it smiling, and keeps me going, particularly those last couple of efforts. She even got saucy with me today, around round 3, I was whining about having to go for a forth and she said: "Well, you COULD stop, but then you'd be someone who didn't finish..."

Clearly, I've been rubbing off on her. LOL. Or she's just naturally that evil. Either way, I got the job done.

Sprints looked like this:
Lap 1: Not too bad. Strong out of the gate. I could really feel my quads going after this one. I actually felt a little more like I was doing it "right", than just pushing through it.  Time: 40.35

Lap 2: Still okay, feeling pretty fresh still and again, I notice my quads seem to be assisting in moving my legs faster. It did just feel better than it has. Tired toward the end, but not a bad lap. Time: 42.34

Lap 3: Not psyched to be doing this sprint. Starting to feel tired. Run buddy keeps me motivated and runs on ahead. First 100m go okay (not superfast), and the next 100m around the curve feel exhausting. Slowing down, for sure. Have to stop and suck in air at the end. Time: 44.13

Lap 4: Not feeling recovered after my 1/2 lap (200m) walk. Only feeling about 85% there. Take an extra 10 secs before starting sprint. This is grueling. The whole effort is a push, and I feel like I'm running on fumes. I try and concentrate on maintaining my breathing and just keep moving. I actually hear myself make some sort of high pitched grunt of frustration/exertion in the last bit of it.
Died at end. No throwing up... Wanted to. Wanted to for the better part of the next few minutes while walking around. Didn't. Victory! Time: 46.67 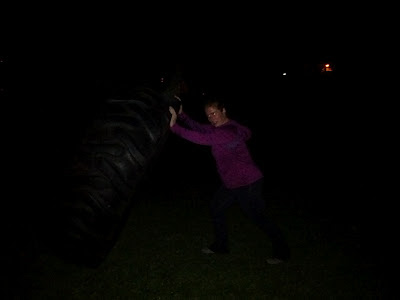 I am so happy when Sprints are over. After walking a full lap of the track afterwards to recover (seriously, it takes that long to get back to 100%. It's ridiculous. And my legs feel useless!), we found the tire to flip. Granted, the picture is near useless, but I would just like to prove that there WAS in fact a tire, and I did in fact flip it. Although, I will not lie, this is a big ass tire, and after a Sprint WOD like that, destroying my legs, I do need some assistance getting it off the ground. It happens. I wonder how much this thing weighs?

After that, it was home to a tasty protein shake, some bonding time with my foam roller (ow. ow ow. ), and now off to bed.

But, as much as I hate these stupid sprints, I'm choosing to take tonight as a sign of a small victory. While my shortest time remains consistent with previous attempts, I notice that the decline in times (over attempts) is much less, AND my slowest time is MUCH better than previous slow times, by a ton.

I'm not sure where I "should" be seeing improvement, but I'm assuming this is a good sign. If I'm able to remain more consistent with the sprints, and not fizzle out so fast, I would take this as a sign that I'm building the appropriate muscle to compensate? Hmm? More things to research.

On that note. Off to sleep. Sprint Wod of Death, out of the way for another week!

Posted by What A Beautiful Wreck at 12:25 AM