"The world breaks everyone, and afterward, some are strong at the broken places." -Ernest Hemingway

Woo, BlogLand! It's been an interesting couple of days.

Yesterday, I took my pet rock (...Grover... and no, that was not of my doing. lol.) out for a walk, up a mountain. Grover is (er, was... more on that later) a solid 17.5#, and the mountain was Spruce Peak, in Plainfield, VT. Just for sake of discussion, it appears that this particular climb is 4.4 miles round trip, with an elevation gain of 1093 ft.

I managed to wrangle in an enthusiastic potential Spartan, who thought throwing a rock up a mountain sounded like a fun way to spend a Sunday. Here's the before picture of my victim. I mean... recruit:

We look so fresh, and perky. Grover is still intact (*sniffle*), and the adventure begins. Not too far up the trail, Steff acquired her own rock (Peanut), and the real good time began. I think we tried out just about every type of throw one could imagine. There's the overhead hulk-smash, the underhanded granny bowl, the right or left handed shot put, the tricky right or left sided twisting and heave, or the beloved backwards over the head kamikaze...
There did seem to be a real technique onto where/how to throw it on a mountain trail, however... Things to consider: Throw it OVER/past the parts that you need two hands to navigate. What happens if you heave it out there and it goes wonky and now you find yourself on safari through the side of a mountain forest, calling for your rock? Ponder the splash radius of a 17.5# solid object landing in a particular squishy mud area. What about the dreaded roll-back issue?

This was a far more complicated process than just "throw rock up hill".

It was a gloriously muddy, wet, overcast day, with just enough chill in the air to keep us from being puddles of sweat. Which, I suppose, really wouldn't have mattered, as we were covered in mud, anyway.

This is where I would like to take a moment to note that Steff and I, while in the process of Chicking ("What is “Chicked”? Chicked is a racing term that defines when a man is passed on the course by a woman!" - Shawty Spartan) the mountain AND throwing big rocks, managed to totally Chick an entire group of relatively youthful hikers. We got some raised eyebrows, and a few comments to the effect of "What, it wasn't hard enough already?" but on we pressed.
And, 2.2 miles and about 1:45 min later, here we stood - Summit!
I would just like to note that while we may not be "pretty" at this point, we are muddy, sweaty, and feeling pretty damn awesome.

Oh, and because they felt that we were stealing the show, Grover and Peanut insisted on their own scenic moment:
Now came the dilemma. There is a fire tower on the top of the mountain. Roughly 4 flights of "stairs" with "railings" that lead you up to a somewhat ghetto-feeling, really high up structure for scenic views. The question became, "do we take the rocks to the top of the tower?" because, had we really reached the "top" of the mountain, if we didn't go all the way up? 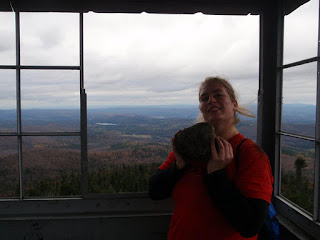 Let me tell you BlogLand, the trickiest thing I did all day was carry a rock up those stairs, thus having only one free hand. It was slow going. My arms were tired. My eyes kept looking at the spaces between stairs. Nonetheless, we were once again met with success, hoisting our rocks for scenic pictures from the even-higher height. I'm not even going to discuss the nerve-wracking adventure the trip down those stairs was. I will leave it at the fact that Steff, Peanut, Grover and I survived, in one piece. With most of our sanity.

Thus, after a wee snack, we began our decent... and quickly learned an important lesson. If you value your Pet Rock, you must NOT throw him/her down a rocky mountain trail. Even if you threw him/her UP said trail. Why? Physics, people. When you throw UP a trail, yes, you have some pretty good muscled force. When you throw DOWN the trail, not only do you have your muscled force (albeit a bit less, after about 2 hours of exertion), but you also have gravity on your side. Grover and I found this out the hard way. He is not nicely smooth (he originated in a river bed) anymore, and let's just say I have a nice little Baby Grover paperweight for my desk at work.
So, if you can not throw, you must carry. Carrying said rock proves to be decidedly more fatiguing for me than throwing it. It was a long 2 miles down. Left shoulder. Right shoulder. Front Carry. Overhead carry. 17.5# gets heavy when it stays in one spot too long (my shoulder bruises may attest to this...).
Nonetheless, we did get in a few more throws on the way down, on the softer spots. Here are the obligatory, unflattering, action shots: 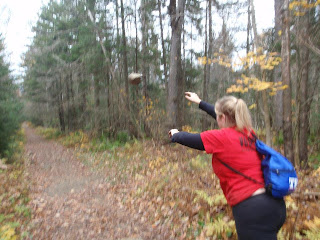 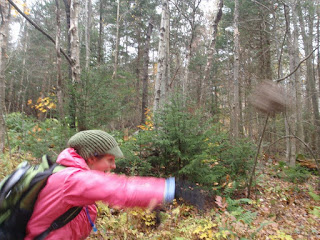 And, without injury (except to our rocks) or incident, Steff and I completed our very first Pet Rock Walk.
So, there you have the nuts and bolt of our hike (and hey, who doesn't love some pic spam, occasionally?), onto some thoughts.

WOW. That's what I thought. Why? Because I got to the top of that damn mountain, after throwing a pretty damn big rock the whole time, and I still felt good. I wasn't terribly out of breath, any more so than anyone would be, my muscles weren't jelly at the top (...they may have been by the time we got back down...), and nothing hurt. My knees didn't ache, my ankles weren't screaming. Let me tell you, BlogLand... This sort of activity is WAY more fun when you can just get out and enjoy it, rather than feeling like you're going to die the entire time. If I had lost sight of why I was getting in shape in the first place, this was an excellent snap back to focus. I WANT to be able to do more stuff like this. I don't want to be stopped by my physical abilities... and slowly, I'm learning that I don't have to be.
Can I just take a moment to say that Steff and I held a conversation the entire way up (intersperse with throw-grunts), rather than just panting, short breaths? Amazing. I had an excellent time.

This also became a day of reflection, incidentally. A little over a year ago, I had managed that same hike. No rock. I say managed, because I did get to the top of the hill. It was not pretty. I felt like hell. I made it on sheer will alone. And I remembered that, and found a picture that made me stop in my tracks and thank Old Me for having a (life-saving?) moment where I decided to change my life. Here's what made me reflect: