It is our attitude at the beginning of a difficult task which, more than anything else, will affect it’s successful outcome. - William James

It's good to be back, BlogLand. It feels like forever since I sat down and told you about the adventures I've been having. Although, I suppose that's because instead of having adventures lately, I've been grounded, benched and caged in my own body. It'd been horrid.

Last weekend I ran that 5K race, despite the pulling sensation in my knee. Then I got in the car and sat for 1.5 hours to drive home. When I got out of the car at home, it hurt. A lot. It was so tight I couldn't straighten my knee hardly and I was "walking" with a pronounced limp (okay... so, maybe a 5K road race wasn't my best plan?). I did everything I was supposed to - Ibuprofen, Ice, stretching... but then I got up on Sunday morning and crawled out of bed like I was 80. It hurt any time the muscles in my left leg engaged at all... and let's not even discuss uphill or up stairs.

Sunday night I was at home, foam rolling my leg (which hurt like hell), until I finally just sat on my living room floor and cried. I spent a lot of time being trapped in my body because of my weight and fitness, and was so insanely frustrated that it was happening AGAIN. Plus, I admit, I was a little extra worried because of the kind of pain it was - this wasn't the muscle stiffness and soreness I was accustomed to. This was sharp and pulling. This was much different... and in my head (particularly since it hadn't gone away in an extended period of time), serious. This was my KNEE.

After sitting and crying out the pain, worries and frustration, I decided to Spartan up and figure out the way over this metaphorical wall. There is always a way.

I ran my worries past the GT and a couple of other friends that know stuff and it was a universal opinion: Go get it checked out.

Have I mentioned that I have an irrational fear of doctors/hospitals? I avoid them at all costs, but my mobility was more important to me than my fears. I made an appointment.

As it turns out, my regular doctor was out and I got to see someone else. This particularly woman happened to be a 50 ish year old Triathlete. I felt like this boded well for the situation - to be a triathlete you have to be a little crazy and into the extreme (in my opinion), so she might understand where I was coming from.

She was wonderful. I mentioned Spartan Race and she immediately asked me if I was planning on doing the Beast in Killington ("Of course!"), and asked me if I had any other races coming up before then. She was talking to me like an *athlete*. I almost didn't know how to handle it, I won't lie. A lot of days, I still feel like that Fat Chick (Hello, FCS!), playing at fitness and training. It takes a long time to make those internal adjustments to something else.... but this woman - a serious athlete - was talking to me like a peer. When was my next race? How was I training?
Her next few words were magic to me, though. She dispelled my worst fears: "Well, you definitely don't have any tears or ruptures."

*sigh of relief* It was apparently "just" some inflamed tendons in the back of my knee. She then made me love her just a little bit more, by informing me that she could tell me to recover the slow and easy way - ice and a lot of rest, and they'd eventually calm down. But then she went on to tell me that she wouldn't do that to me in the middle of race season, and there were other ways we could get this better, as she referred me immediately off to a sports-specializing Physical Therapist.

Feeling a little lighter and a lot less worried, I hobbled home and awaited the next day's appointment with the PT.

After a lot of poking, prodding and manipulating my legs and joints, the PT came to the same conclusion. There was nothing serious or unfixable. I absolutely would not be laid up for weeks on end. But then he told me what was actually wrong (the root of the inflamed tendons).

His hypothesis was that sometime during the race I had probably (PROBABLY. Ha!) slid sideways or at just the right angle that I had sort of "sprained" my pelvis (Your pelvis is actually 3 bones, that can get displaced like any other). By screwing up the alignment in my pelvis, my left leg was 1/2 in shorter than the right leg. So, the (left) short leg was reaching and straining to keep up, resulting in the ragingly inflamed tendons.

Oddly, this made a sort of sense. The good news was (according to my PT) that my general construction and bone alignment is really good, so he didn't anticipate this being a reoccurring issue - I had just managed a perfect storm of moments to get here.

Then it got awkward. LOL. Ever had someone realign your pelvis? It's a little strange. While some of it is done with your own muscles (putting your leg in certain positions and pushing, etc.), at some point, they have to put their hands on you. Quite frankly, it is a little strange to have some old dude you just met checking the alignment of your seat bones, etc.

But I disassociated enough to get through that, and he told me to get up and walk around. Let me tell you, BlogLand, those were the most wonderful steps I'd taken in a long time. I was 90% better already. He made me step up some steps and walk back and forth, and while I could still feel that my tendons had some healing to do, they weren't pulling like crazy, the pain was negligible and I could WALK without limping. YES. Weird, but simple solution.

So, to follow up, I have to go back for a check up this week, but I am supposed to not run at all or do anything that will pull on my knee through this weekend. Just ice and rest and swimming (apparently, between the doc and the PT, swimming is a miracle cure!). Starting on Monday, if it feels okay still, I can start trying some easy runs with walking in them. Basically, as soon as or if it starts hurting, I am to stop immediately. He, like my GT, told me to be smart about it and use some good judgement.

It is really challenging though, as the weather has been wonderful (if a little hot...). I haven't really been able to go out running in 2 weeks and I feel like a wild animal in a cage. I never, EVER thought I'd say this, but I really miss it. I WANT to go for a run. Rest assured, though, I'm following directions and taking care of this... it's got to heal in the best way possible. I'm not taking any chances. After all, it's Race Season!
--------

On another note, the official countdown is on. Twelve Days until my 30th Birthday.

I have some goals I'm shooting for, that I'm hoping to hit on that day, so the GT and I have revamped the eating plan and the workouts for the next couple of weeks to (hopefully!) crush those goals into the ground.
It may be an ugly couple of weeks, but nothing I can't or won't handle.
In prep for this, I got on the scale and took my measurements today, for the last time until my birthday. I then took a deep breath, and refocused my mind. I have faith in the process and the journey. Now is the time to just let go and do some work. 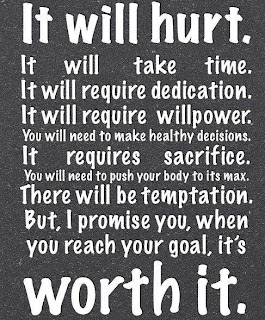 "Experiment in Being More Awesome."


Posted by What A Beautiful Wreck at 1:45 PM